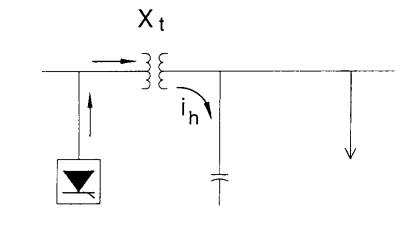 Parallel resonance occurs when the system inductive reactance and capacitive reactance are equal at some frequency. In case of parallel resonance, harmonic current will oscillate between the energy storage in the inductance and the energy storage in the capacitance. It can be said that at resonance frequency, parallel connection result in a very high resistance. The oscillating current can cause high voltage distortion and the oscillating current is usually high as well. Parallel resonance principal diagram is depicted in Fig. 3.

Series resonance is a result of the series combination of capacitor banks and line or transformer inductance. In case of series resonance, inductive and capacitive reactance compensate each other, thus creating a low-impedance path to harmonic currents. This type of resonance is used in passive filters, to provide alternative path for the specific harmonic. However, it can cause extremely high harmonic currents and failure of capacitor banks or even transformers. Series resonance circuit is provided in Fig. 4.

Harmonic currents having harmonic orders that are multiples of three, are called triple harmonics (3rd, 9th, 15th etc.). These harmonics unlike others are flowing through zero sequence, thus causing high neutral conductor currents. Third harmonics are generated by 4-pulse bridge rectifiers, that are commonly used in one-phase equipment, for example, computers. EA-PSM calculates triple harmonic currents and in order to find neutral conductor current, the following formula should be used:

In most networks, the 5th harmonic is the lowest frequency with a considerable amplitude. For such networks, it is useful to choose a capacitor-reactor connection with a tuning frequency below 5. However, if the network is loaded with strong 3rd harmonic voltages, the tuning frequency shall be below 3.
To properly size reactor, calculations should be done at each possible capacitor bank step.